Basic Antenna Designs to get you on the air 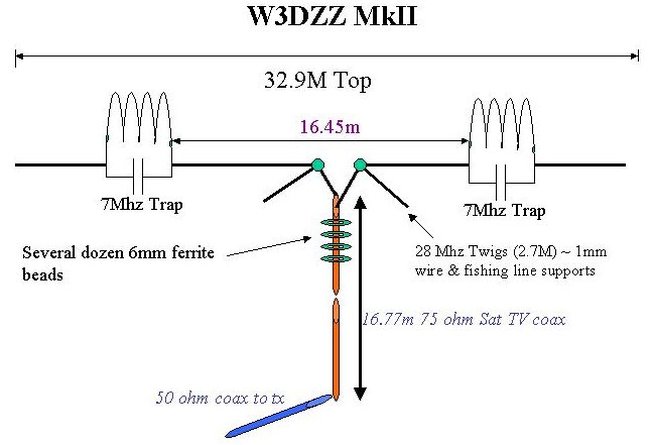 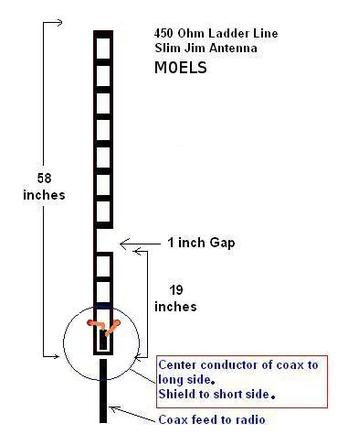 Article edited from the original April, 1993 QST and modified for clarity


In the April 1993 QST, Nathan Loucks, WB0CMT, (no longer active) described a 2 meter beam, (Yagi) with a PVC boom shown in the drawing below.
This article has been edited from the original QST article with added information that may be helpful to some builders desiring to build the antenna for 2 meters.
This 3 element 2 meter Yagi is nothing more than an "adjustable match" half-wave dipole antenna (the driven element) using direct feed 50 ohm coax, mounted between the other two elements which are the reflector and the director. It will give you about "7db" gain according to the author.

The boom and mast are made from 22mm PVC Overflow pipe. The three pieces of PVC pipe are held together with a PVC T joint near the center of the boom and secured by screws. Elements can be made from small diameter aluminum tubing or rods, brass brazing or hobby rods. (If you cant find a 40-inch rod for the reflector, you can solder wire extensions to obtain the full length.)
Drill holes that provide a snug fit to the elements approximately 1/4 inch or so from the boom ends. Epoxy the director and reflector in place after entering them in these holes or add screws to secure them to the boom. A pair of holes spaced 1/4 inch and centered 16 inches from the reflector hold the two-piece driven element. The short ends of the element halves should extend about 1/4 inch through the boom. Solder the 50 ohm feed line to the driven element as shown in the drawing.

The author, Nathan Loucks used a pair of 4-inch pieces for the element extensions for tuning held in place by Choc block style electrical connectors to extend and adjust the driven element to allow for operation in various parts of the 2 meter band.
You can trim the driven element to length for operation in the desired portion of the band if you prefer, so start long and trim the driven element as needed. The drawing below shows the beam assembled for vertical polarization.
You may want to turn the boom "T" 90° for horizontal polarization. (SSB is Normally Horizontal) 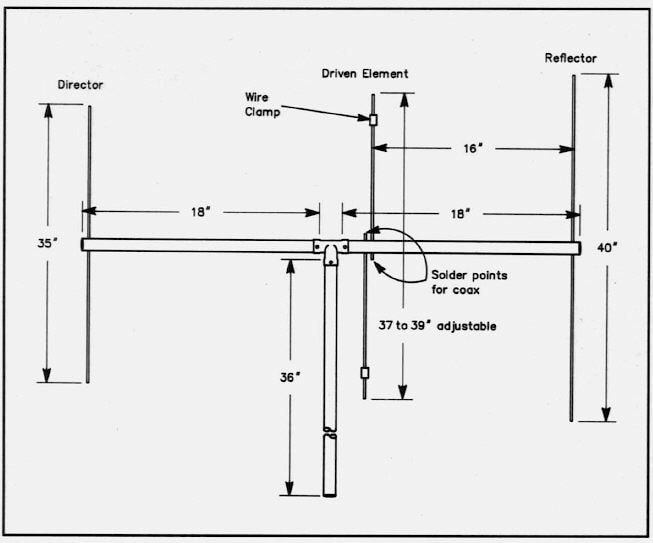 Original drawing above showing vertical polarization from his article and has not been altered.
Note that the coax connection points are on the end of each half of the driven element.
Center conductor to top half of driven element, shield to the bottom half.
Typically the reflector is 5% longer and the director 5% shorter than the driven element. By spacing elements about 0.15 to 0.25 wavelengths from each other you end up with a beam antenna with about 7dB of gain. (According to the author) To figure out the correct length of the driven element the following simple formula for a half-wave antenna above 30 MHz is used :
Length in feet = 475 / Frequency (MHz)

Construction : 22m PVC Overflow pipe is recommended for the supports. Two 18 inch pieces become the boom  where the elements are installed. A 36 inch piece is used for the mast. (Although not shown in the original drawing, it is assumed the the T is about 2 inches long.)
The boom and mast pieces are held together with a PVC T joint. Three small holes are drilled in the T as well as the boom and mast pieces. (Look at the T in the drawing for the small black dots. These are the locations of the screws).The boom and mast are inserted into the T and rotated until the holes are aligned. Then the boom is secured with screws...or you may use bolts also if you prefer.
Screws or bolts are used to secure everything in place. Put them just to the side of the elements so as to press against them when tightened. The antenna in the drawing is vertically polarized which is best for FM work. If you want to use the antenna for SSB then you will need to turn the antenna 90 deg to the Horizontal.
The director and reflector elements are cut as according to the lengths in the drawing above.

A straight pencil line should be drawn along the boom with an X mark for each hole to keep the holes aligned at the same plane. The hole size chosen should provide a snug fit for the rods when pushed through. After drilling, the reflector and director elements are slid through the holes and adjusted for equal length on each side of the boom. Screws, bolts or epoxy cement is used to hold them in place.
​
To build the driven element the boom is measured and marked at a distance of about 16 inches from the reflector. Two holes are drilled 1/8 to 1/4 inches apart. Two rods each around 20 inches in length are pushed through the holes until 1/4 inch protrudes from each side of the boom. THE DRIVEN ELEMENT AND MATCHING DEVICE HAS JUST BEEN MADE. Also see "Tuning" below for more info.
The 50 ohm coaxial cable is soldered directly to the protruding stubs. Screws or epoxy is used to secure the rods to the boom but only after swr tuning is done.
Electrical tape or a silicon compound is used to weather proof the solder joints.
It is better to have a little excess length for the driven elements. The antenna should now be hoisted to an elevation of at least 5 feet from the ground and kept away from nearby metal objects or the reflector can be against the ground with the director aimed straight up while braced to prevent it from falling over while tuning. Keep the coax away from the driven element while tuning. See tips below.

Tuning:
With the aid of an accurate 2 meter SWR meter placed in the line between the transceiver and the antenna, the driven element lengths can now be trimmed OR slid in or out of the boom OR both, equally for the lowest SWR at the desired frequency. Remember, start long with the driven element, check swr, and either trim or lengthen each end as needed and or slid the elements in the appropriate direction. Using this method of tuning should yield you a good swr.
After lowest swr tuning is finished use the screws or bolts to secure the elements.
Tips....
Mount the antenna on another suitable support up as high as possible when finished with tuning.
Using the 36" PVC pipe connected to the boom keeps a metal mast support away from the driven elements which may deform the antenna pattern and create swr problems.
After connecting the coax, it can be taped or secured with UV resistant wire ties to the boom and layed out toward the reflector end while securing it to the boom and then a large loop back down to the mast below the driven element to keep the coax away from the driven element. One other method would be to push the coax from the reflector end of the boom toward a suitable sized hole near the driven element and then make your feed connections. Seal the hole if needed afterwards.
Portability:
The 2 meter beam can be made very portable by removing the 2 18" boom sections or use your own method to disassemble the antenna.